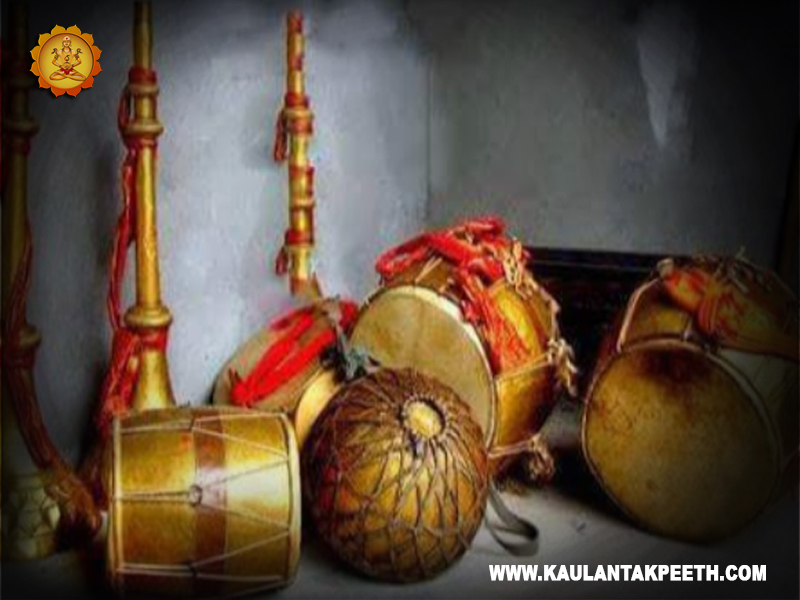 The presiding Goddess Kurukulla’s tradition is full of Beeja Mantras and music tradition. The Bhairavs, Bhairavis and the ‘Deulu’ (Devotees) of the Goddess, celebrate every Sanskaras, festivals, and Poojan Parampara with music played through unique instruments.

The unique beats of Kaulantak Peeth play very important role in dance called ‘Nati’. ‘Nati’ is known to be the origin of the ‘Natya Shastra’ because ‘Swacchanda Bhairav’ (Bhagwaan Shiva) teaches ‘Natya Shastra to Kurukull Devi Ji (Mata Parvati) on Mount Kailash. One of the forms of Nati is the slowest form of dance of the world.

For this gamut of music, there are special instruments for every Devi and Devata of Kaulantal Peeth. Below is the list of few min instruments of Kurukulla Devi Ji:

An instrument made up of metal alloy of brass or bronze and shaped like a bowl. This instrument is made up of thin metal sheets with a narrow bottom and wide mouth. Hide of buffalo, ox etc are used to make the Nagara. It is is bounded by leather ropes in order to tighten the grip of the hide. Wooden sticks are used to play the Nagara. Nagara is played along with the Dhol and the one who holds and/or plays the Nagara is known as the ‘Nagarchi’.

Baam is similar to Nagara. But ‘Baam' is massive in size. Its mouth is more than two feet in radius. In ancient times, Baam was used during war times to announce the war. But today, it is used to send the immediate, alert message to people that something related to the Goddess is about to begin. Sometimes, the Baam is played in the middle of the festivities to invoke the ‘Veer Bhav’, the zeal in people.

Daffal popularly known as the ‘Daff’ is made up of Sheep’s or goat’s skin. It is made up of metal or wooden strip which is round in shape.

The Dhadh is similar to Dhol. The outer shell of the ‘Dhadh’ is made up from the Bekhali tree, and wrapped in Sheep’s leather. Dhadh instrument played the key role in the pooja and the ritualistic worship of the Devi and Devata. The one who plays the Dhadh, called the Dhadi, is a very important person, since he is chosen by the Devi or the Devata themselves.

Dhol is the double sided drum made up of wood and copper. Both sides of which are wrapped in Goat’s or Sheep’s leather and tied with cotton or leather strings. The right side of the Dhol is played with the help of a special stick, while the left side is played with the bare left hand.

The Dhol and the Nagara both are held and suspended from the neck of the one who plays the it. The Dhol is played by the person known by the name of Dholi.

Made up from the shell of Bekhali tree, Dhouns is covered with Sheep’s skin. Dhouns plays important role in Tantra-Mantra, and ‘Awahan’ invocation of the Devi-Devata. During the ceremonies, Dhouns is used to give special signal, to start and pause the ceremony and give the signal from his Devata to the respective ‘Gur’.

It is a smaller size Dhol, wrapped in Goat’s leather on its two sides. The Dragh is played during the Hulaki Nritye of the Devi-Devata and during the special dance of the ‘Gur’.

Thali, also known as Baana is a large metal plate with a holder. The Thali is played with the help of a stick. It is played along with the other instruments.

Chhanchhala is created majorly from ‘Ashta Dhatu’ and Kansa (Bronze). These are two  big plates with cup like hollow in the centre area of both plates that produces unique sound. The one that has bigger cup, is the male Chhanchhala and the other is the female Chhanchhala.

Kansi instrument is made up of two small bronze plates with a thick thread holding both plates at the ends of the thread.

Dhanotu is an instrument similar to ‘Ektara’. It’s name come from the Sanskrit word ‘Dhanush’ (bow). Dhanotu is shaped like a bow.

Shankh is obtained from Shellfish. It has to be blown with much force to produce its unique sound called ‘Shankh Dwani’ There are different types of Shakh Dwani, for instance, one that is played during Poojan Ceremonies, while some are played only at funeral ceremonies. During ancient times, a particular Shakh Dwani was played during war, while some are played only to begin the auspicious ceremonies.

There are different kinds of ‘Shakh’ like Soorya Shakh, Dakshina-Varti Shankh (right side opening), MahaShakh, Shringar Shankh that is decorated with art-work.

Apart from being used as the instrument, it is used in the ‘Abhishek’ ceremonies, like Abhishek of Kurukulla Devi Ji, different Yantra Mandalas, the ‘snan’ of Kaulantak Nath.

‘Nali’ means a pipe and ‘Karna’ means ears. Hence, the instrument Karnali, has one end shaped like an ear with a long pipe. It looks similar to the ‘Dhatura’ flower.

Kahali is made up of Copper and is shaped like a crescent moon. It is always played in pair by two people.

It is an instrument that looks like the shape of serpent. Nagphani is made up of copper and is divided into two parts. Its mouth is wide open with split tongue.

This instrument is similar to Kahali but with five outlets connected to one top end.

Ransinga is ’S’ shaped instrument, made up of copper. It is also always played in pair and is divided into two parts.

Shehnai is the small trumpet like instrument that occupies special place in every ceremony of Devi- Devatas and also in different ‘Sanskaras’. It is also played during Nati performances and in festivities. The one who plays the Shehnai is called the ‘Hesi’.

Kurukulla Devi Ji have six Shehnai, three made up of Silver and three of wood.